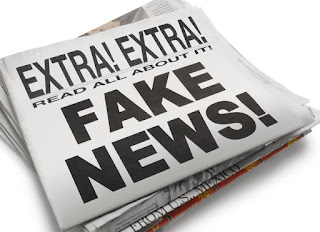 “Fake News” is defined as the intentional dissemination of false or misleading information.  This is not a new phenomenon and is as old as time. If the Gospel is the Good News, then what is some of the fake news being circulated?  Let’s be good journalists and ask the key questions any good cub reporter would.

Things to think about:
WHO
·      Who is Jesus Christ?
o   Fake news says He was a good person, a wise teacher, a prophet, but He is not God
o   The Gospel says in John chapter 1:1-3 – “In the beginning was the Word, and the Word was with God, and the Word was God. He was with God in the beginning. Through him all things were made; without him nothing was made that has been made.”
o   Who do you say He is?
o   Who have you said earlier in your life?
·      Who am I?
o   Fake news says either “you’re a pretty good person” so just keep doing what your doing and don’t think about it too much, OR “you’re worthless” and how could God ever accept someone like you?
o   The Gospel says in Galatians 4:6-7 – “Because you are his sons, God sent the Spirit of his Son into our hearts, the Spirit who calls out, “Abba,Father.” 7 So you are no longer a slave, but God’s child; and since you are his child, God has made you also an heir.”
o   Who do you say you are?
o   Have you always felt this way?

WHY
·      Why do we need Jesus?
o   Fake news says you don’t need Him! Just try to be a good person and it’ll all work out. Besides, you don’t want to be one of those religious, crazy, right-wing zealots who looks down their noses on other people.
o   The Gospel says in Romans 3:23 – “for all have sinned and fall short of the glory of God” and in Romans 6:23, “For the wages of sin is death, but the gift of God is eternal life Christ Jesus our Lord.”
o   Why do you believe you do or don’t need Jesus?

WHAT
·      What do I need to do to be a son of God?
o   Fake news says go to church, give some money, and try not to do any of the really bad sins (or at least don’t get caught).
o   The Gospel says in Romans 10:9 - If you declare with your mouth, “Jesus is Lord,” and believe in your heart that God raised him from the dead, you will be saved.
o   What do you need to do to be a son or daughter of God?
·      What happens after this life is over?
o   Fake news says nothing happens that’s consequential.  You die and you turn into worm food.
o   The Gospel says in Matthew 25:46, “Then they will go away to eternal punishment, but the righteous to eternal life.”
o   What do you believe happens when you take your last breath?
o   What if you’re wrong?
WHEN
·      When do I need to make a decision?
o   Fake news says you don’t. See talking points for Who am I? Why do I need Jesus? What happens after this life is over?
o   The Gospel says in 2 Corinthians 6:2, “In the time of my favor I heard you, and in the day of salvation I helped you. I tell you, now is the time of God’s favor, now is the day of salvation.”
o   What is keeping you from saying Yes today?


o   When will be the right time if not today?
Posted by Bob Goodwin at 2:29 PM No comments: 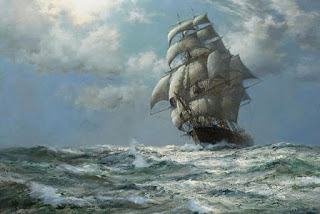 The fourteenth chapter of Exodus is the well-known story of Moses parting the Red Sea. Sometimes remarkable things can become so familiar to us that they lose their impact and thus their ability to rouse us.  May God renew and refresh this story in our minds as a testament to His unmatchable presence and power. Moreover, we can see in this historical account parallels to another dead-end God engineered a solution for, the penalty for sin.

Exodus 14:16
“Raise your staff and stretch out your hand over the sea to divide the water so that the Israelites can go through the sea on dry ground.”

Things to think about:
·       You will remember that the Israelites had been slaves in Egypt for over 400 years.  God had chosen Moses to be the deliverer of the people from slavery to freedom in the Promised Land.  After the multiple plagues God inflicted on the Egyptians, (culminating with the Passover) Pharaoh finally relented and let the Israelites go free.
o   Just as the Hebrews were captives, we too are told that we were slaves to sin (Romans 6:20)
·      But, as the people were heading out into the desert to begin their journey, Pharaoh once again had a change of heart and began chasing the Israelites down with the full force of his army.
o   Even though we have been set free from the power and penalty of sin, our adversary has not given up (1 Peter 5:8)
·      Led by a great cloud by day and a pillar of fire by night, the angel of the Lord took them on a circuitous route that brought them to a dead-end at the Red Sea.  With Pharaoh’s army breathing down their necks, the Hebrews wondered aloud why they hadn’t just remained in Egypt as slaves rather than get crushed by the Egyptian army.
o   Many people mistakenly believe that following Jesus will make all of their problems go away.
§  What would you say to somebody who is either espousing this perspective or who hopes it’s true?
o   In the previous chapter, we learn that the long way they took was no accident or miscalculation
§  Ex. 13:17-18 - “God did not lead them on the road through the Philistine country, though that was shorter. For God said, “If they face war, they might change their minds and return to Egypt.” So God led the people around by the desert road toward the Red Sea.”
o   God rarely takes a straight path but He always knows where He’s taking us.
§  Why do you think God operates this way?
§  In verses 4 and 18 He tells us why – “I will gain the glory..”
§  He leaves no room for our pride to be stroked through our own cleverness or strength.  If only God can do the impossible then only God gets the glory.
·      Then “Moses answered the people, “Do not be afraid. Stand firm and you will see the deliverance the Lord will bring you today. The Egyptians you see today you will never see again. The Lord will fight for you; you need only to be still.”
o   Moses’ faith was strong, even in the face of hostility and facts that belied his unwavering belief.
o   Are you standing before uncharted waters today with friends or family asking you what in the world you think you’re doing?
·      Then the Lord said to Moses, “Why are you crying out to me? Tell the Israelites to move on. Raise your staff and stretch out your hand over the sea to divide the water so that the Israelites can go through the sea on dry ground.”

o   They had to literally step out in faith and walk through the path God had provided
o   Faith plus action equals God’s provision
o   Why must our faith be joined by action?
§  James 2:17
o   Are you in a situation currently where it’s time to “move on”?
·      Here at the Red Sea, God made a path from certain death to life.  It required nothing less than a miracle.
o   Just as Moses raised his staff to part the waters, God raised up His Son to create a route to Himself
o   John 14:6 - Jesus answered, “I am the way and the truth and the life. No one comes to the Father except through me.
§  What are other routes people try besides God’s way?
§  How many miracles can you think of with respect to our salvation?
·      And when the Israelites saw the mighty hand of the Lord displayed against the Egyptians, the people feared the Lord and put their trust in him and in Moses his servant.
o   And so we see that God got the glory then and even today as we continue to honor and praise Him for what He has done
·      What Pharaoh (fear-aoh) is chasing you down today?
o   Does it feel like God is taking you down the longer, slower route?
o   How does today’s study encourage to both “be still” and “move on”?


o   Remember, all of this is happening for God to get the glory!
Posted by Bob Goodwin at 8:27 AM No comments: