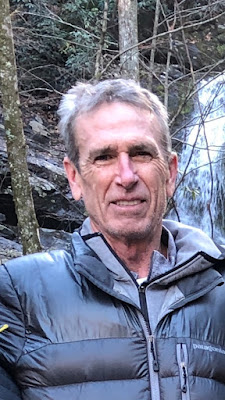 This week our friend Mike Chappelle got promoted. After several years of ebbs and flows in his battle with cancer, he finally succumbed (thankfully, this last round was fairly brief).  I remember Mike saying he didn’t care so much about streets of gold, a mansion, or anything else – he just wanted to “mow Billy Graham’s grass” 😊  Classic Chappelle!

·       Mike was a charter member of our Tuesday morning group.  There were five men God put on my heart to invite to a Bible study and Mike was one of them.

o   If you knew him, you know he was highly successful in his business.  Between his Boston bravado and success, I was pretty intimidated to reach out to him, but he immediately said Yes and thought it was a great idea.

o   What you may not know is if it wasn’t for Mike, none of you would be reading this right now.  Mike asked if would be OK to invite someone else (duh) and that someone was Vic.  Just the two of us met for 2+ years before we had anybody else join us.  After that, it just sort of kept growing and here we are today.  Thank you Mike!

·       Like all of us, Mike had his share of challenges.  He never backed down from them though and faced each one with the same grit, transparency, and sarcasm we loved him for.

·       The past few years have been especially hard given the ravaging effects of cancer.  A remarkable athlete in his prime, cancer took a heavy toll on him.

o   A few of us went to see him 2 ½ years ago and had an amazing weekend with him.  Somehow, he found the strength to take us on his favorite walks in the mountains of Asheville, NC

·       As believers we know the end of this life is not really the end but the start of a new beginning.

o   That’s not to diminish the grief and sadness we feel when we lose someone dear to us.

o   John 11:33-35 - When Jesus saw her weeping, and the Jews who had come along with her also weeping, he was deeply moved in spirit and troubled.  “Where have you laid him?” he asked.  “Come and see, Lord,” they replied.  Jesus wept.

·       However, John 11:25 illustrates that death is not the final word - Jesus said to her, “I am the resurrection and the life. The one who believes in me will live, even though they die”

·       Philippians 3:20-21 - But our citizenship is in heaven. And we eagerly await a Savior from there, the Lord Jesus Christ, who, by the power that enables him to bring everything under his control, will transform our lowly bodies so that they will be like his glorious body.

o   Mike’s body has wonderfully, miraculously been remade to be like Jesus’

·       John 14:1-3 - “Do not let your hearts be troubled. You believe in God; believe also in me. My Father’s house has many rooms; if that were not so, would I have told you that I am going there to prepare a place for you? And if I go and prepare a place for you, I will come back and take you to be with me that you also may be where I am.

·       Let’s not rush to ignore the pain when someone we love passes.  It’s real and it’s part of the process.

o   But we also have HOPE and it’s that hope that makes all the difference.

o   Mike hoped for an eternity he knows he didn’t deserve (like all of us).

o   We believe Mike’s faith in a Savior has reaped an inheritance he could never earn and that he can never lose.

o   What joy awaits us who have put our trust in the resurrected Christ.

Mow on Mike, mow on!